Skip to content Skip to navigation
See our Campus Ready site for most up to date information about the fall semester.Campus ReadyCOVID Help
Commencement 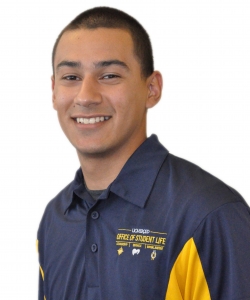 What are your plans upon graduation?
I’ve committed to the U.S. Army National Guard and hope to pursue a master’s degree in education at Fresno State.
How has your experience at UC Merced prepared you for future endeavors?
The experience I gained here at UC Merced allowed me to further my education and myself. Being able to be alone in a different setting allowed me the opportunity to grow as an individual and learn a lot about what I want as my career and the passion I have for helping people.
Were you part of any clubs, organizations while at UC Merced?
Merced County Project 10%, Mariposa Merced Youth Impact Initiative, Omega Delta Phi Fraternity Inc.
How do you feel you’re leaving your mark at UC Merced?
I feel I'm leaving my mark here at UC Merced through the various organizations I have been involved in. Since UC Merced has been a relatively new campus, I have been able to take leadership roles in every organization I have joined.